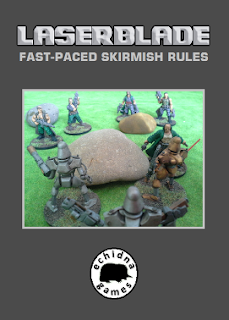 Laserblade is the kind of small battle game I like. It is easy to learn, easy to play, and it allows for many variables. The games are relatively short and packed with action. Laserblade is great for the science fiction fantasy genre, too. The rules allow for players to come up with a variety of characters. You can easily combine figures from the Airfix Space Warriors and Galaxy Laser Team as well as miniatures from Star Wars, Star Trek, Buck Rogers and other popular shows.

Neil Goodacre is author of the Laserblade and owner of the company, Echidna Games. He understands the genre very well. Just visit the Echidna Games website and their Facebook page. Neil’s paint work on the Galaxy Laser team and Airfix Space Warriors is superb. He also does wonders with other figures, such as those from the Russian firm Technolog.

Laserblade is a game of small unit action. It uses very small teams in a limited space. These are a squad or less; from three to a dozen characters. Movement and turns use a simple initiative roll of the dice to see who goes first. Up to three figures can be active in any one turn.

The genius is in the way characters are made. Neil has a very clear point system for putting a character’s attributes together. His knowledge of the space genre is obvious here. The system allows for a wide variety of individuals using the classic - and not so classic - tools of the space fantasy trade. You could easily build a team based on a Star Trek landing party, a Star Wars Rebel crew, Imperial Stormtrooper squad, Farscape team or Buck Rogers’ type mission. You name the series and Laserblade can accommodate it. And I will go so far as to say that these rules could also cover the different races and units from Warhammer 40,000.

Best of all, it is easy and quick to set up and play. You can vary terrain, use different scenarios and have whatever assortment of characters suits you. This is how it can so easily accommodate the Galaxy Laser team, Airfix Space Warriors, and other unusual figure sets.

My only complaint is the use of the ten-sided dice. Those of us who are not gamers and not near a gamer shop will not have a cheap and easy time getting them. I am very old-school and prefer the classic six-sided dice. .Other than the dice, everything is cherry.

A wish, perhaps. Echidna Games might consider a few optional add-on rules to host on its website, such as the effects of lower gravity, higher gravity, thinner atmosphere or weird cosmic effects that dampen energy weapons, halving their range or striking power. Just a thought, of course.

Coincidentally, this comes as I have uploaded and posted OMOG Advanced, the full game for 20th and 21st Century troops. That is, World War I to present conflicts. OMOG is also a skirmish type game for small-unit action. But fear not, good reader, Laserblade is a very different game and a very different genre. 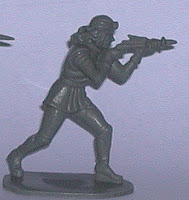 Those of you who know me from other activities outside hobbies are aware of my reputation for being outspoke and blunt about my feelings on things. If something is junk, I will tell you in no uncertain terms. My recommendation, insofar as :Laserblade, is that if you are interested in small actions in the Science Fiction genre, check it out. See for yourself. Laserblade is a good, solid game. The only types who might object are the prickly nitpickers who wring the life out of anything fun. And Laserblade is fun!

If you have any questions as to how figures for Laserblade can look, check out the Echidna Games website and their Facebook page.