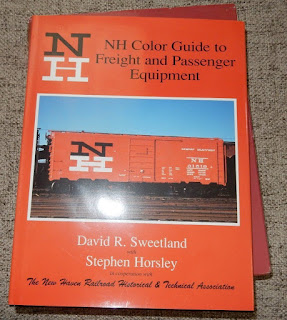 The New York, New Haven and Hartford railroad connected New York City with Connecticut, Rhode Island and Massachusetts. Commonly known the New Haven, it was the largest and most powerful of the New England railroads. I first learned of the New Haven through Lionel Trains when I was a child. The black boxcar with NH in block letters was very appealing. Over 55 years later, it still looks fine.
The New Haven was a very attractive railroad. Its original color was green with yellow trim. Its logo at that time was New York, New Haven and Hartford in cursive script. The color scheme changed under a company president named McGinnis. Though a failure as president, he introduced the bright color scheme of black, white and orange with block letters. Known as the "McGinnis Scheme", it made the New Haven the most colorful Northeastern railroad.
I have no personal connection with the New Haven, except for having ridden Amtrak from New York to Boston’s Back bay station a couple of times in the 80s. Amtrak followed the old New Haven route. My interest was due to the attractive boxcars, locomotives and passenger cars. It was a big part of Northeastern railroading for many years, until it was absorbed into the Penn Central merger.

This week, I received the New Haven Color Guide to Freight and Passenger Equipment by Morning Sun Books. It covers the era of color photographs: 1940 to 1967. Most of the photos were taken between 1955 and 1967. Some show older equipment that was still on the line. Most photos are of equipment that was current at the time.
The quality of the photos is excellent. This has been a constant through all of the Color Guides I have seen: the Erie-Lackawanna, CNJ & LV, Erie & DL&W, New York Central and the New Haven. This volume covers boxcars, flat cars, hoppers, gondolas, MoW, cranes, cabooses, cars converted to head-end or MoW, and passenger cars. Because of the interest of the authors and the involvement of the New Haven Historical and Technical Association, there is information of rebuilt wood boxcars and captions with specific details of most cars. 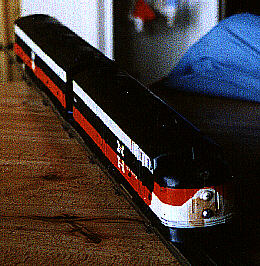 Other companies have published photo galleries showing New Haven rolling stock, but they are not in color. This color guide is in crisp, sharp color. The photos are excellent and they give you a much better feel for the equipment. Good photography is a standard in Morning Sun Books. I have ten of their books and the color images in each are superb.
I recommend NH Color Guide to Freight and Passenger Equipment to fans of the New Haven Railroad.
http://morningsunbooks.com/
***
I am primarily an operator of O and O27 trains. I have a few railroads that I especially like. One thing I enjoy is running models of trains in the livery of those railroads. I like having good references to the motive power and rolling stock of those roads. The Morning Sun books have been useful to me. They average about 130 pages and are chock full of excellent photographs.
Posted by Unknown at 8:07 PM 1 comment: 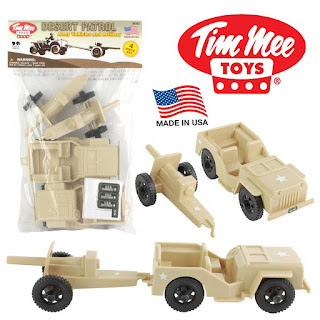 When I see some of the low-grade toy soldiers and vehicles from China, I wonder who is going to raise the bar. Then another of the new Tim Mee products comes along and sets things straight. The new Tim Mee has several advantages. Top among them is quality. Superior plastics, better colors and for the multi-piece items, superior construction.

A few months ago, I reviewed Tim Mee’s Combat Patrol set. The set included two of the Tim Mee jeeps and cannons. They have been around for over half a century. The new releases are a quality item. Not your average plastic toy soldier vehicles, at least not these days. Everything is better that the cheap stuff coming from China.

Now, Tim Mee has released this same set as Desert Patrol. The difference is that it is molded in tan plastic. Those of us of a certain age may be reminded of a television series called Rat Patrol. And those who have watched the news over the years have seen tan vehicles similar to the ones used by every Middle Eastern army. There were tan jeeps used by the British 8th Army, the Israeli forces, Jordan, Saudi Arabia, Lebanon and a host of others. We saw them on the news in footage from a dozen little conflicts and incidents. 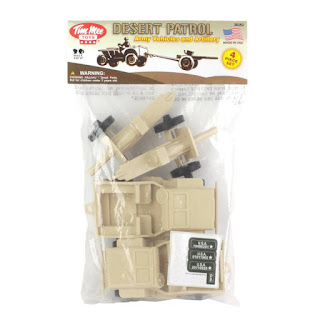 The Desert Patrol is perfect for those wishing to arm their Tan armies in the battles of Green Versus Tan. The color is just right. Each set also comes with stickers to place on the jeeps and guns. And again, it is the quality that stands out. Knockoffs, clones and cheap copies cannot stand up to these recasts of the original Tim Mee jeeps. They are sized just right for 2" to 2 1/2" soldiers (1/35 to 1/30).
The header card of the Desert Patrol set depicts a jeep with a 37mm antitank gun.  The actual guns included in the set are the same ones that Tim Mee has made since the 1950s. They are small field guns, rather like the infantry guns used during World War II. I surmise that they could be used as field guns or howitzers of 75mm to 105mm bore. I am also reminded of the British 25 pounder field gun. Tim Mee used to include the same gun in their Civil War sets of bagged soldiers. Instead of the tires, the Civil War guns were fitted with red spoked wheels. They looked like World War I vintage French 75mm guns.

The field guns, like the jeeps, are sized just right for 2" to 2 1/2" soldiers. They go well with the Tim Mee Vietnam-era soldiers, as well as the old World War II troops. You can easily make a crew for these guns by converting other toy soldiers. They are among the best cannons for army men ever made. 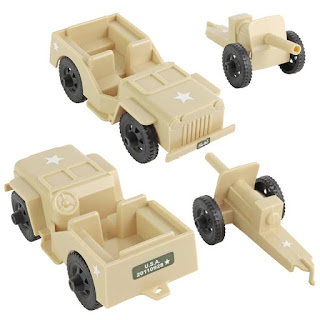 For toy soldier enthusiasts, the Tim Mee Desert Patrol is a great addition to your collection and your army. This is a quality product that stands far above the general run of Chinese and Mexican made  vehicles.
(Thanks to camera problems, I had to borrow pictures from the Tim Mee site. These accurately depict the Desert Patrol set and what is in the bag. As you can see, the guns and jeeps are nicely colored in tan. )

Would you liek a set of your own? Here is a link to Victory Buy and Tim Mee on Amazon:

I was thinking of military trains and small layouts. Many train makers have produced Army, Navy, Marine Corps and Air Force trains. Lionel and Marx made them in O and O27. American Flyer had a few military type cars in S gauge, and Model Power made an HO Army Train.

As an Army veteran, my first thoughts naturally go to the Army type trains made by Lionel, Marx and Model Power. Marx made olive-drab military trains in both tin-litho and plastic. Many of these are expensive thanks to the collectors.

When looking for inspiration for a military layout, inspiration was almost in the neighborhood. Earle Naval Ammunition Depot is a few miles from here in Colt’s Neck, NJ.  Ar least, that is the main base. Earle also has a smaller installation with a large pier near Leonardo, NJ, on the Bayshore. The pier is used to load military ordnance to ships. It is connected to the main base by a private rail line and a private road called Normandy Road.  The base and the pier are about 15 miles apart.

I like to design layouts for small spaces. The Earle Ammunition Depot gave me an idea of how to make an interesting O27 layout. It revolves around the concept of a facility at each end.  The loop-to-loop design allows for continuous running and a point-to-point operation.

Our first railway is a simple 3 by 8 foot dogbone type with a pier on one side. Each loop also has its own siding. The area between the loops is where I diverge most from the prototype. Earle’s railway runs through woods and open spaces and past small towns. Our model has two bridges over a small inlet. Bridges over water help contribute to the nautical theme. 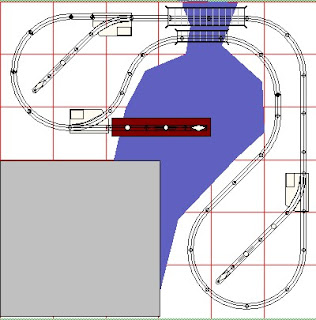 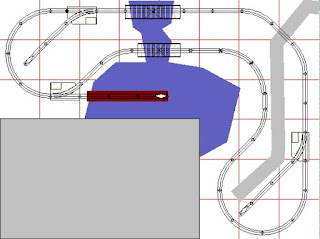 Finally there is a 6 by 6 by 3.  It has neither bridges nor pier, but they could easily be added. 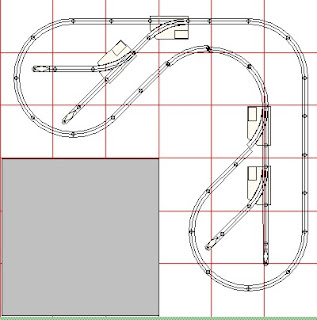 These simple track plans allow plenty of action in a limited space. They are ideal for smaller locomotives and rolling stock. Marx train enthusiasts have a choice. on one hand, each layout would do well with tinplate and the 6 and 7 inch tin litho cars. Scale fans could use most of the plastic and tin scale cars. Most of the tin steamers would be fine, as would the 400 and 490. and the diecast 999. For diesel, the 70 tonner and S1 are Ideal.

Those using Lionel type trains might consider the old O27 trains, the smaller K-Line O27 (recasts of Marx) and Industrial Rail cars. K-Line and RMT’s version of the Marx S3 switcher would be ideal. Both the k-Line and Lionel O27 Alcos and the O27 Boxcab would also be good choices.

Making a Navy train ought not be too difficult. One can find cheap cars at shows. The cars will need some work, such as removing rust and general repair and repainting. The Navy paints a lot of its vehicles Battleship Gray. Some of their switchers were painted Engineer Yellow. You can find photos of Navy trains online