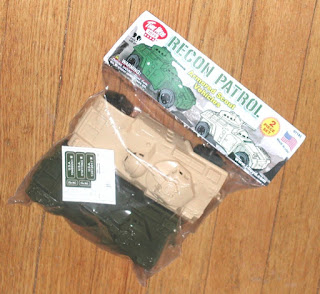 Just received: the Tim Mee “Recon Patrol: Armored Scout vehicles” set. These are based on the Lockheed XM800W, a three-axle vehicle introduced in 1972. The Tim Mee version has one less axle. 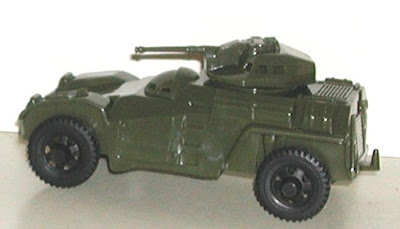 The Lockheed xm800w was one of the vehicles submitted for testing for the Cavalry. By 1975, the project was cancelled and none of Lockheed’s vehicles was accepted. 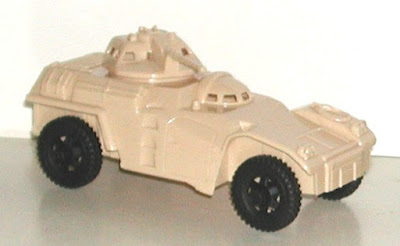 Tim Mee has been making these since 1978. You can see the appeal.  They have a “space age” look to them.

Overall, this is an interesting design. The roof hatch being small, was it meant for discarding spent ammo? I wonder. The driver’s hatch is like a type that swivels to allow the driver to get in or out. Armament is obviously an auto-cannon and could be anything in the 30mm to 30mm caliber. Molded on are pioneer tools and other equipment.

The Tim Mee armored cars look good in tan or green. They are clearly meant for soldiers in the 50mm to 60mm sizes.

Now my wicked mind goes to work. The turret could be altered or removed to allow a larger gun or recoilless rifle, making the car a light tank destroyer. Pop the turret and with a little work you have an open-top command car. You could also mount katyusha type rockets. 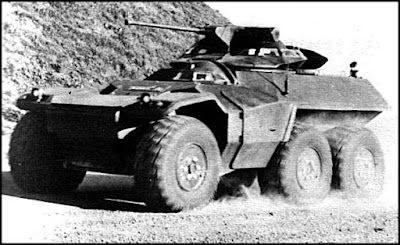 The armored car could also be a futuristic sci-fi vehicle. A little work can render that cannon into a large ray gun. One might also make it a rocket launching vehicle. Paint it white with black markings and you have an Imperial Stormtrooper support vehicle. Use other colors, and you can have a land car for the Galaxy Laser team figures. All you would need is a cunning paint job to make a Klingon battle car. Use your imagination. 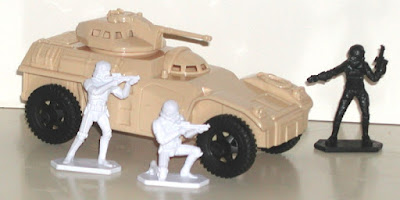 There are many other ways to enhance the cars. Camouflage will look great on them. Woodland, jungle, desert and winter camo schemes can be applied. Details are prominent enough  that they can also be painted, right down to the straps,

Obviously, the Tim Mee armored cars are one of the more attractive vehicles for the toy soldeir hobby.

The cars come with stickers. Jeff Imel has done a lot of work adding stickers to both Timmee and BMC products. Hard to see in photos, the stickers include thee large and six small stars and three serial number panels in OD green.

These are cool modern recon vehicles. I also like their potential for sci-fi skirmish gaming.

Presently, you can order yours here: https://www.amazon.com/TimMee-RECON-PATROL-Armored-Cars/dp/B076ZQCRN3

Armored cars like these are generally used for reconnaissance and infantry support. They are lightly armored and generally lightly armed, although some anti-tank versions have heavier guns. The armored cars are made for speed. Classic armored cars include the German SD Kfz 222 and 234 series, the German “Puma”, British “Saladin” and American “M8 Greyhound.” The modern Stryker vehicles are eight-wheeled armored cars used as personnel carriers wit ha few heavily-armed support versions.

Our Shambattle and Omog discussion is for players of Shmabattle and our OMOG skirmish games. That includes the basic games as well as supplements, from Ancients to Sci-Fi
https://www.facebook.com/groups/shambattle/

Posted by Unknown at 2:57 PM No comments: