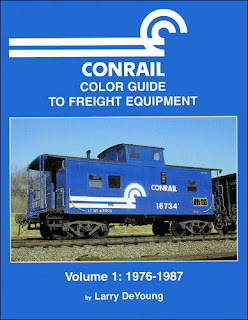 Back in the 1970s, the major Northeastern railroads were facing a dire future. Penn Central was falling apart after the merger that created it. The Erie-Lackawanna was overburdened and poorly maintained. The Jersey Central was barely holding on. Enter the USRA and the result was Conrail, a government sponsored merger of the Penn Central, Erie-Lackawanna, Reading, Lehigh Valley, Jersey Central and Lehigh & Hudson River. The Conrail Merger created a super-power railroad.
Granted, Conrail was not as colorful as its predecessors. The Conrail colors were blue with white lettering and a curious white logo that looked like an old fashioned opener. Actually, it was supposed to represent wheels on rails.
Conrail painted its locomotives and cabooses the same blue with white lettering. Most freight cars were in conventional colors such has boxcar red. That is, the cars that were repainted. Many cars from roads that Conrail absorbed had their logos and names painted over, and then a white CR added.
The Morning Sun Conrail Guide to Freight Equipment Volume I: 1976 - 1987 by Larry De Young did quite an extensive look at Conrail equipment. And though some may complain that there was a lack of revenue-earning passenger equipment - Conrail handled the old commuter lines until NJ Transit and Metro North took over - that would have been redundant. None of the passenger service cars had been repainted by Conrail. They carried the liveries of their respective former roads. The book focuses on Conrail-painted equipment and spares us the rest. Also absent were cars whose original logos and names were painted over with a blue patch with white CR letters. This book is strictly Conrail paint.
The one thing that amazed me was the number of cabooses that were illustrated. These had been repainted Conrail Blue and have a variety of origins. After all, Conrail had inherited the fleets of six roads. The rail historian and model railroader is treated to a great assortment backed with good information on the origins and other particulars of the various cabooses. There is also plenty on boxcars, insulated boxcars, hoppers, covered hoppers, flats and more. Also included are non-revenue equipment, cranes and business cars.
In all, The Morning Sun Conrail Guide to Freight Equipment Volume I is a useful reference with great photography. Good editorial decisions have kept the focus on Conrail and spared the reader any redundant materials. This is all original Conrail paint. And it is mostly from the early years when Conrail was establishing its identity. Railroad modelers and railroad historians interested in Conrail and Northeastern railroads will find this a great reference.
****
I like the Morning Sun Color Guides and have the ones for EL, DL&W / Erie, CNJ / LV, NYC, NH and Conrail. The color photography is superb and they are a great reference. Though I am not the rivet-counting collector, I enjoy seeing the various car types and such. Then again, I am the same way about armored vehicles and have several references books to them. Whether it’s an Erie-Lackawanna 40' boxcar or an M3 Medium "Lee" tank, I enjoy those details.
http://morningsunbooks.com/
Posted by Unknown at 8:49 PM No comments: