The troops I painted previously in the “chocolate chip” camouflage illustrate just how creative one can be with this set of figures. They were cast from the Rapaport /Castings / REB mold # 5681 “Air Commandos.”  My intention with this set was to paint them in the style of Vietnam-era US soldiers. 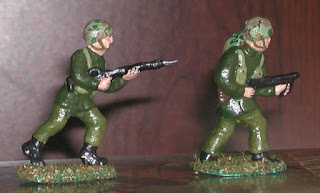 The trick to painting these figures is simple. Their uniforms and field gear are almost generic, insofar as soldiers from the 1940s to recent years. They wear a jacket similar in cut to a field jacket or tunic. Their boots are meant to be the British type worn with a cuff-like legging. These can easily be painted as a one-piece combat boot. The belts and shoulder straps are cut like many used by US, UK, German, and other armies. The most that might be necessary is a little filing on the back of the man with rifle and bayonet. Using thick paint can simulate a Y or H harness. Ther ammo pouches are of the British type. Scoring two grooves on each would make them similar to the German ammo pouch for the submachine gun. One can also file them shorter to resemble the ammo pouches used by the US Army from 1957 to the present. 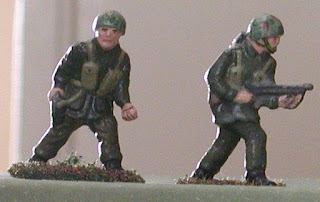 Then again, one might not bother filing the pouches and still get a fine finished product.
One trick to develop is filing a bowl or M1 Hadfield helmet into other types. With many homecast GIs, it is possible to carefully file the helmet to resemble a stalhelm. One can also file them to replicate a Fallschirmjager helmet. For longer barrels on firearms, wire brads or very small finishing nails can be used. At this size, the head of a finishing nail looks like a flash suppressor.

Posted by Unknown at 8:55 AM No comments:

Homecast Soldiers: A Little Paint Makes All the Difference

When I got back into homecasting back `05, I acquired molds in bits and pieces. My first acquisition were Guardsmen mods from a friend. The molds included Castings / REB and Prince August Molds. Soon after, I added other molds., One of the first was the old Rapaport /Castings / REB mold # 5681 “Air commandos.” The mold makes copies of the Lone Star / Harvey British paratroopers. These are an advancing rifleman with the British Bullpup rifle, a man with a submachine gun and an officer with pistol. The figures wear the familiar Dennison smock and British field gear with the long ammo pouches.

I cast a lot of figures from that mold. And I got creative. The uniform is like many of the era: field jacket, combat books, basic helmet and webbed gear. The faces are crude, but the figures have good, animated poses. The profile did not look much different from American troops circa 1944 - 1980. I tried painting the solders n various different schemes and they all looked great. A little filing of the helmet led to another type: fallschirmjager. A little effort makes a plausible set of German paratroopers for toy soldier gaming. 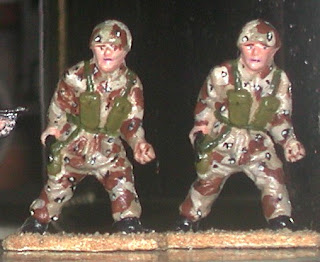 Let us be clear at this point. These are toy figures. They were never meant to be accurate military miniatures. The same can be said of our paint and file conversions. They look good enough, but are not accurate models of US troops or German paratroopers. The figures are passable. The advantage is that this mold can churn out small armies for games like OMOG Advanced.

The set illustrated here is my latest. They are painted to imitate the “chocolate chip” camouflage issued during Desert Storm. As I had already primed the figures before deciding on a color scheme, I was not able to file the helmet to resemble the modern US army helmet. 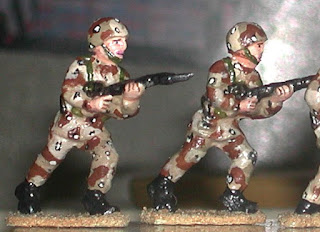 Here are links to some of the other soldiers I have made with this mold, a little paint and sometimes a little filing: 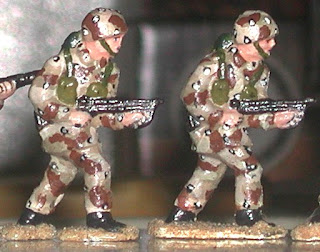