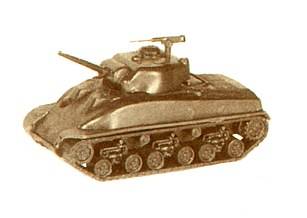 The miniature vehicle that started it all.

The older boys on the block first had them: HO size soldiers and tanks. My mother asked where they bought them. So it was that my brother and I were introduced to the neighborhood hobby shop. There was a display that looked like little steps were small tanks.  Alongside were brightly-colored boxes that had HO- sized soldiers.

There was not much choice back then. The display had at most a dozen vehicles, maybe less. Two kinds of soldiers were available: an Infantry Combat group that could pass for GIs, and German infantry. Tanks and vehicles were 25 cents each. Boxes of soldiers were 50 cents. 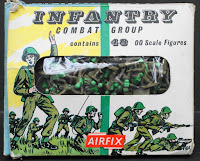 We each got a box of soldiers which we would split up later, and a couple of tanks. The first tank was that little M4 Sherman. To buy them, we told the counterman the number of the vehicle we wanted. He would go to a back counter where there was a small stack of light gray boxes. It was then a matter of finding the right number and getting the tanks we wanted. The vehicles came in small plastic bags with a couple of decals.

The little M4 was slightly smaller than HO. I figure it was closer to 1/90. It was more delicate than the usual toy tank. The little M4 had a swivelling turret, a gun that raised and lowered, and a machine gun on top of the turret. Little wheels under the hull made it easier to roll on the table. 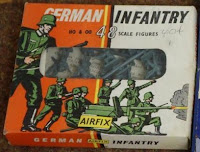 This was the first. We later bolstered our little HO army with Panzer 4s, Panthers, M47s, M48s. As the range of vehicles expanded over the years, so did our small armies.

The original M4 was a model of the M4A1 Sherman Medium tank, circa 1942 - 1945. ThisA1 version had a cast hull that gave it a rounded shape. The suspension was of a later sort introduced around 1944. The gun and other characteristics hied to initial production in 1942.

Little did hobbyists know that the suspension was a later type. These were the M4s that we had, and as we learned more of World War II tank history, we painted them accordingly. 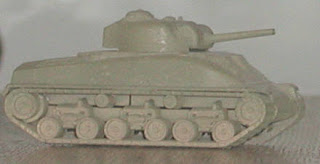 The most common color was olive drab with the bright white star decals. When Airfix released their first series of Afrika Korps and 8th Army troops, many a ROCO M4 was painted in desert tan. Like the ROCO SWS half track, this was the only Sherman tank we had. Anachronistic suspension system be damned.

In 1967, ROCO introduced a 1/87 scale Sherman M4A4. This had the boxy look of a welded hull and it sported the earlier type of suspension. Slowly, it started replacing the earlier ROCO M4A1 on store shelves.

The little M4a1 was not going to go away. A Japanese company made molds copying 25 of the earliest ROCO tanks. Imported and sold under the UPC (United Powermaster) and Eldon Match Kit brands, the series retained the earlier M4a1 as well as the 1/100 M47 and M48. For several years afterward, these kits were available in hobby shops.

Another company also made its version of ROCO tanks. Aurora, the model kit maker known for its Universal Studios monster models, jumped in with a kit named for a popular TV show at the time. “Rat Patrol” included knockoffs of the ROCO Panzer 4 and panther tanks, a couple of jeeps and a squad of infantry. The set also had terrain pieces that included sand dunes and an oasis complete with a pond and palm trees.

Then came the Aurora kit that knocked everyone back a few pegs. Introduced in 1968, “Anzio Beach” was the ultimate model kit / diorama set. Inside the box were vehicles, terrain pieces, a landing craft, scenery, tank obstacles and soldiers. This set was a bargain, all told. If we had bought individual ROCO and Airfix pieces, we might have spent at least $5.00. Anzio Beach  cost $1.98. 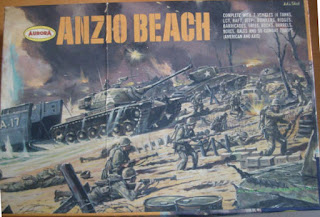 Inside the box was that small M4A1 tank, a knockoff of the ROCO model. There was also an M47 tank, a first series type, plus the German Panther and German flak tank.  That alone was a bargain, as ROCO prices had climbed since 1961.There were soldiers, too. They were knockoffs of the Airfix US Marines and German Infantry. A small landing craft was big enough to carry a ROCO tank. Terrain pieces included a couple of dunes, a pillbox and a bunker. There were trees, rocks, tank obstacles, barrels and boxes.

Anzio Beach was available for several years. The little M4A1 was still around in significant numbers.

A Spanish company named EKO produced knockoffs of ROCO and Roskopf vehicles, though they gave several a few some improvements. The EKO M4A1 had only two differences: a little soft-plastic antenna was fitted on the turret, and the gun had a long muzzle brake.

ROCO may have ditched the M4A1 in 1967, but UPC, Eldon, Aurora and EKO kept it in production for many years afterward. Back in those early days, it was all we had and we were glad to have it.

The little M4A1 had one main flaw:  scale. It was smaller than HO 1/87. Yet for a tiny tank introduced at the time, it is a good model. Detail is decent. The engine cover, pioneer tools and the like are well represented. You can even see the back details where the upper hull overhangs in the rear. The little M4 goes together easily. It has an upper hull, lower hull, two pieces that are the left and right track and running gear, turret, main gun and machine gun. Where the hull clips together in front, the ROCO, Eldon / UPC and EKO pieces come together almost seamlessly. The clips on the Aurora M4 are more visible.

To paint, we used to disassemble the M4 and paint everything its base color. The usual paint was either Testor’s or Pactra olive drab. Tracks were painted Steel. Before we knew of the Pactra Steel ,we would mix Testor’s Silver and Flat Black. The turret machine gun was home-made Gunmetal, which was either Steel and flat black or Silver and Flat black, the black being the predominant color. The final touch was adding decals. These would be stars on the turret and sometimes, the glacis plate. Keep in mind that this was the 1960s and the better military hobby paints by Pactra had not yet made it to our local hobby shops. The little Testor’s and Pactra bottles were everything. Both companies also sold sets of Military Flats.

We went hog wild on the landing craft in Anzio Beach. Using Testor’s military flats, we would give a base coat of Gray. Next, we would apply wide Navy Blue and Sky Blue stripes as a camouflage. They looked great!

For British tanks in the desert, we would base coat the M4 in Testor’s Desert Tan. Camouflage was done by adding Brown blotches. They looked pretty good. The hobby shop owner showed us how to camouflage a ROCO tank using Testor’s military Flats set. He sold a lot of paint that way.

The original M47 and M48 made by ROCO and Roskopf were 1/100 scale. By 1967, they had disappeared from the ROCO inventory. Both were replaced by better-detailed, 1/87 scale models. As Roskopf promoted itself as 1/100, it continued to make both tanks. Aurora copied the M47 for its Military Midgets and “Anzio Beach” set. EKO also produced the 1/100 versions.

Anachronisms. The M4A1 with hi-volute suspension did not appear until late 1943 - 1944. Previously, it had the Vertical Volute system.

Though included in Aurora’s “Anzio Beach”, the M47 tank did not begin production until 1950. Likewise, the Flak Panzer appeared in 1944, some time after the actual Anzio Beach landing.

The Panther tank included in Aurora’s Rat Patrol set is an anachronism. The Panther was not issued to German forces until after the end of the North African campaign.

The most long-lived of these tanks is the M47, whic h still sees service in some armies. As of this writing, Spain uses several as tank-recovery vehicles. Iran has 100 to 200 upgraded M47s with a replacement turret sporting a 105mm gun. These are used as reserve rather than front-line vehicles. The M47 has served continuously since 1950 and saw combat in Asia, the Middle East, Afrika, Pakistan and India, the Balkans and other places. Ironically ,though the M47 was produced and initially issued to the United States forces, the tank never saw combat with the American ground forces.

Aurora’s Panther tank has a shorter barrel than counterparts from ROCO or EKO. The same went for the Aurora Military Midgets Stalin tank. The reason was packaging. Aurora truncated the barrels so they could more easily fir the blister packaging used for its Military Midgets series.